by Kurt Epps (The PubScout)Feb 11, 2020Restaurants & Bars, The Blog, Wilmington 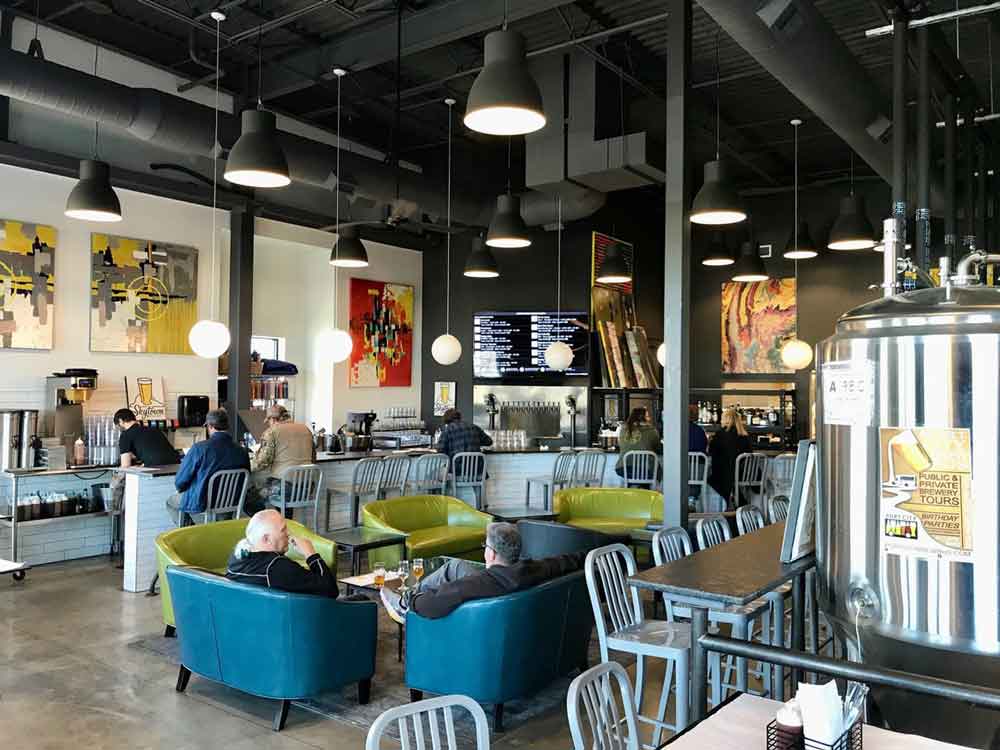 Beer nuts have long been able to enjoy great craft beers and Mexican fare “with a Southern twist” at Beer Barrio’s corner spot in the heart of downtown Wilmington. And apparently Chef Stephen Durley and his wife, Hayley Jensen, have been successful enough there to launch another beer spot for ILM’ers at Skytown Beer Company.

Hey, when you know your way around both the scullery and the brewery, and you’re driven to succeed, these things usually happen.

So on a tip from coastal NC’s dynamo Realtor Chris Creekmore, I sallied forth to sample what Skytown, located on New Centre Drive in Wilmington, had to offer.

As it turns out, there’s a lot. There’s an airy, bright, welcoming and chic interior design (the handiwork of Carol Jensen), and a space that also includes four-seater tables, a neat curved bar, a relaxed easy chair and sofa “living room” seating area and gleaming mash tuns within an arm’s reach.

What comes out of those gleaming mash tuns is pretty darned good beer, based upon those I sampled during my visit. The Dreamsicle Milkshake IPA (7.4%) is killer, as is the Cashmere-Dragon (7.4%), and NEIPA style made with Cashmere and Styrian Dragon hops. I’m told that Beer Sommelier Hayley Jensen oversees that department, and she’s clearly doing a damned good job. Given her extensive beer resume and experience, it’s no surprise that there is good beer here, and Barley Legal, a kick-ass TIPA that clocks in at 10.5%, adds further proof. 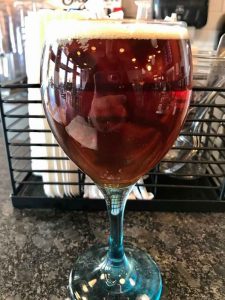 It also helps that Stephen, the head chef, is also a brewer. The couple got started as home brewers (what serious brewer hasn’t?), and their hands show a deft touch around the kettles. The beer menu is quite varied, though. With an hour drive back home to OIB, prudence (and Barley Legal) demanded that I limit myself on this visit. There’s always next time. 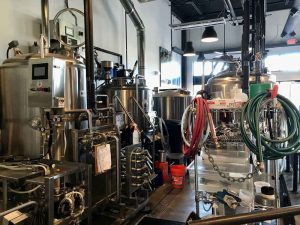 I love it when a brewer also makes the food, because he knows what flavors complement others. Stephen’s menu offers a wide variety of great apps and entrees, most with that same Southern twist you’ll find at Beer Barrio. One of the most interesting apps I just had to try was something called Deep Fried Sausage Gravy.

Huh? Who deep fries sausage gravy? And what does it taste like? Answer: Chef Stephen (it was his creation), and it tastes EXACTLY as you’d expect Deep fried Sausage Gravy to taste. It comes as a basket of five “cakes” (too much for me if I wanted to enjoy more beer), but, man! To have these babies as a side to an omelet or eggs over easy with sausage might be an instant ticket to Heaven. 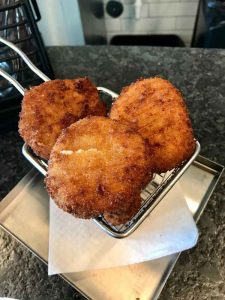 Unfortunately, breakfast items are not on the Skytown menu. But a whole host of other good things are, and their presence will necessitate a return visit.

Which will probably be with that dynamo Realtor Chris Creekmore since he got me into this.
And, hopefully, it will be on his tab.