The Fat Pelican is Dope

The PubScout and friends journey to The Fat Pelican in Carolina Beach.

Back in the day, “phat” was a word young people used to describe something as highly attractive, desirable, excellent, gratifying or simply cool. The word has morphed, oddly, into “dope” for reasons I will never understand. But they mean the same thing.

The Fat Pelican in Carolina Beach, a rather unique and fascinating pub with 400 beers in their cooler could qualify as “phat” on all counts, especially the last four. The “highly attractive” description would likely apply only to a select group of visitors (like yours truly and friends) who appreciate darkly lit, labyrinthine rooms, a plethora of fascinating, seemingly unrelated bric-a-brac on the walls, seats that are anything but Bauhaus and a back yard that’s akin to an amusement park. 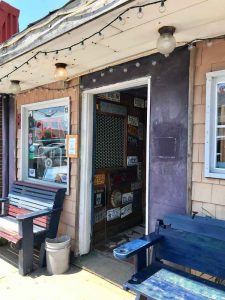 The idea is to enter the rather nondescript front door, proceed to the massive cooler, select a beer (provided you can actually decide on just one) and bring it to a bartender like Faith for an accounting. Then find an appealing spot to quaff, all the while trying to read the walls, appreciate the eclectic artwork and determine why you are not only fascinated but actually enjoying and reveling in a place like this.

My visitors from New Jersey, all friends who had come for a biker convention (at my home), stopped at the Fat Pelican in Carolina Beach after an excursion from Southport on the ferry to Fort Fisher, where we planned to Wend our Way to Wilmington (sounds like a song title) for some sightseeing, victuals and libations. 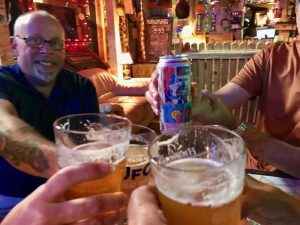 I’m a dive-bar guy, and The Fat Pelican’s status as the #1 Dive Bar in N.C. and listing as one of the top 25 in the nation compelled the visit. Ramshackle would be an apt descriptor for the interior, and the ceiling and the walls did not scream out — or even whisper — Frank Lloyd Wright. The furniture was Early Ralph Kramden, which added to the charm. But it was phat as heck.

Add to the mix some of the rare beers we were able to find and our adventure was nearly complete. Bell’s Brewing’s Song of Myself from its Leaves of Grass series was exceptionally delicious, and my buddies were captivated by their own choices. Ron chose Batsquatch, a hazy IPA from Rogue, and sang its praises. Full disclosure: I’d never even heard of either beer before the Pelican visit. Maria chose and enjoyed a Wicked Weed Freak of Nature (which seemed rather apropos, given our surroundings). Paulie Z., the hippest, coolest, phat-est member of our entourage, was infatuated with his 16 oz. PBR (speaks volumes) and my missus, as usual, enjoyed her Stella Artois.

Had it been less hot and humid, we might have taken the party out to the bright backyard, where the ambiance is, um, distinctly — but interestingly — different. We did see one couple canoodling under a massive bull’s head, though I doubt they were bothered at all by the heat — or by our gawking. But I’d wager it becomes a hopping place in the cool of the evening, especially with the bandstand occupied. 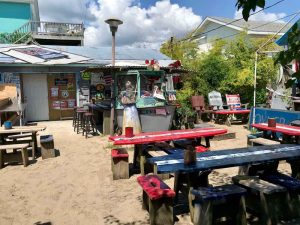 Since we had things to do, things to see, places to go, food to eat and beers to enjoy in Wilmington, we could only stay long enough for one beer. But everyone agreed that The Fat Pelican was a fun way to get our sojourn started.

If you venture down Carolina Beach way and you love interesting pubs with real, palpable character and seemingly as many rooms as it has great beers in the cooler, pop in to The Fat Pelican.

It’s one of those phat places you’ll never forget. Even if you’re just drinking a dope PBR.