by Kurt Epps (The PubScout)Aug 4, 2022Restaurants & Bars, The Blog, Wilmington 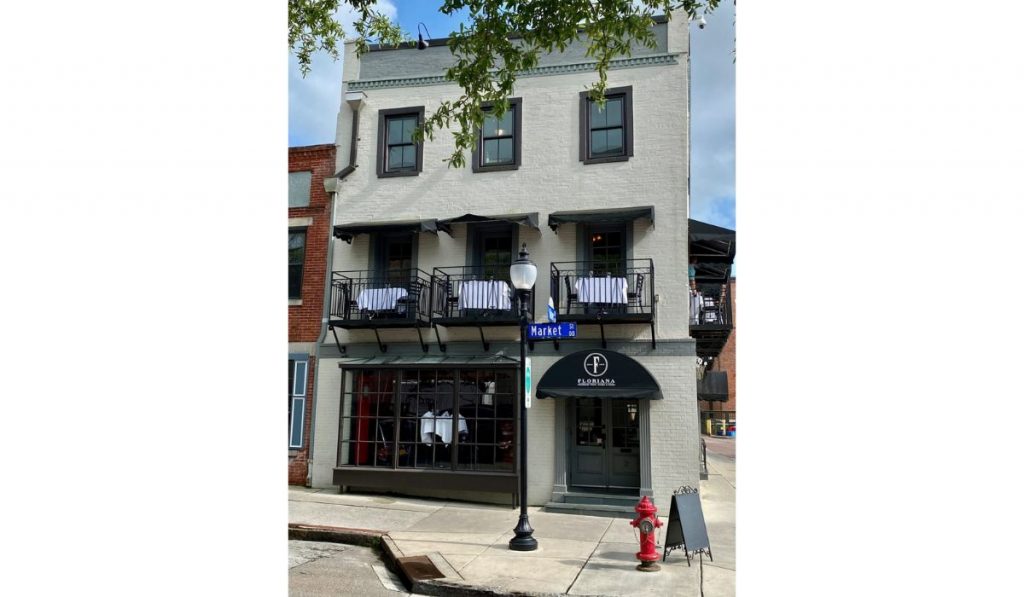 The first time I ever heard about a Wilmington restaurant called Floriana, I was seated at a bar called Rebellion around the corner, doing a review and chatting up a beautiful mom and daughter who were quaffing alongside me. They were both visiting from Washington, D.C., and neither was intimidated by an old, surly-looking biker drinking next to them. We chatted about various things, until the daughter asked, “You like Italian food?”
“Absolutely,” I replied, thinking she and her mom were great Italian cooks about to invite me for lunch. “Well then go around the corner to the end of Market Street and visit Floriana. It positively has the best Italian food anywhere,” she advised. “And there’s another one in DC where we live. We were so excited to know there was one here!” 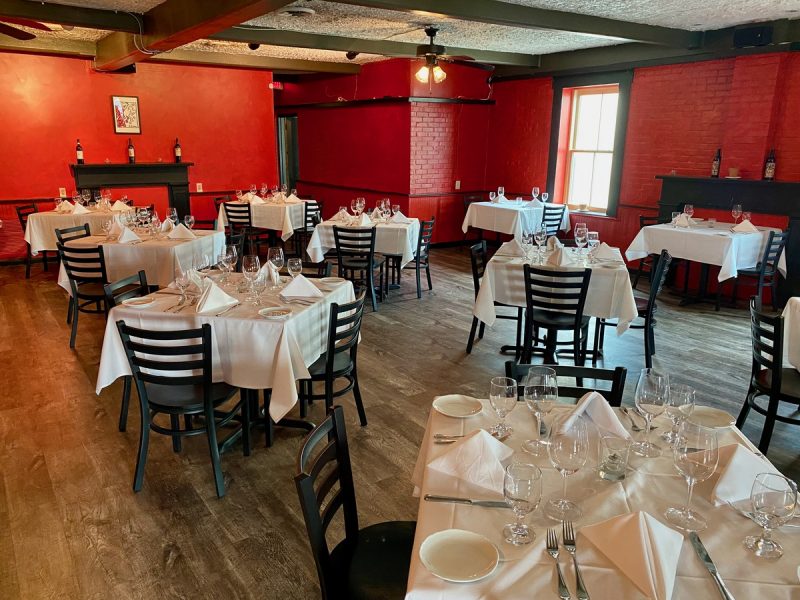 What can this 20-something know about great Italian food, I said to myself. But I made a mental note on the Etch-a-Sketch called my brain just the same. Almost two years went by, taking COVID with it, and I never went to the place. But I came home from a 150-mile motorcycle ride the other day, and the missus declared,” I want to go to Floriana in Wilmington for our anniversary.”

As the gals in the bar had spoken so highly of it, and as it’s probably a good idea to keep a 38-year marriage happy by acceding to your spouse’s anniversary dinner request, I made reservations.

And glorious Floriana! What a find!

Situated almost at the water’s edge and directly across from the Battleship North Carolina, Floriana has a distinct New Orleans-type look and feel to it. If you’re so inclined, you can sit outside at one of the cozy balcony tables, as many patrons were on the night of our visit. We opted for inside seating, as some ominous clouds looked to be forming over the Cape Fear River. As it happened, we made the right call. But the service both inside and out was impeccable. Our server, Blake, was at once efficient, professional, friendly and polite, a good combination for servers.

My guess is that such attention to such qualities is embedded by 38-year-old owner Jamie Branda, whose love for Floriana began in 2012 as a server in the D.C. location. He must have learned the secrets of success early, as he rose from that position to head server, to GM and then to owner by 2016. And, apparently a Renaissance man with a masters in Arabic and Middle Eastern Studies from St. Andrews in Scotland and a J.D. from Georgetown Law, he wasted no time taking the business model to new heights.

“I felt it was a great business model based on service, comfort, high-quality local ingredients and care for our staff and others,” Branda says. “I wanted to replicate it and felt that Wilmington was a great place for our first expansion.” The D.C. resident, who began working in the service industry at age 16, says that his owner duties keep him pretty occupied, but that “the thing I actually enjoy most is walking the floor, chatting with guests and running food to tables,” which he does at the Wilmington location whenever he gets the chance.

Asked about why he thinks Floriana enjoys such a stellar reputation, he responds, “I think Floriana’s reputation is built largely on keeping our promises to the community. We offer high-quality food at a fair price, we insist on friendly and honest service, we support our local communities through local buying and charity work. Above all else, we are selling comfort. I like to think we do an excellent job at ensuring our guests find whatever they need to have a comfortable, relaxing meal.”

And these two very comfortable anniversary celebrants can attest that Branda has achieved his goal. The missus raved loud and long over her Baby Beet Salad, laden with chopped beets, pistachios, arugula and apple. I tried an appetizer called Black Gnocchi (made with squid ink), which was served in the most delicately flavored sauce. It’s clear that Chef James “Jimmy” Kelly has a deft hand when applying spices, for sure, and the plump shrimp that the Black Gnocchi were guarding were perfectly, succulently done. As with any great sauce, it needed sopping with the leftover bread delivered to the table with fresh pesto.

The entrees had some tough acts to follow, but shine they did. The missus ordered and devoured a dish called Ravioli di Zucca, made with butternut squash, gorgonzola, walnuts and sage butter. I looked once and the plate was full; I looked back — after a few eye-rolling sessions with my own entree, and it was empty. My entree was recommended by Branda, as he declared it was his favorite — Scallop and Shrimp Risotto. The dish comes with two huge diver sea scallops seared and a coterie of shrimp in the cheesiest, tastiest risotto you’re likely to have outside home. And the portion was so large, I could not finish it. Good thing I didn’t order the lasagna, also a Branda recommendation, as one plate could have fed three or four mouths. Turns out it’s the most famous dish at the DC location, too. 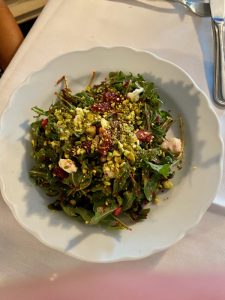 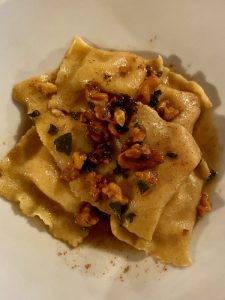 Surprisingly, while the food knocked our socks off, the bill did not. But all I heard on the ride home from ILM to OIB was “What a great dinner that was! My God, that was SO good! I can’t get over those ravioli and that salad!”

I guess I should try to find the two gals from Rebellion and thank them for the tip. It pretty much insured another year of marital bliss. 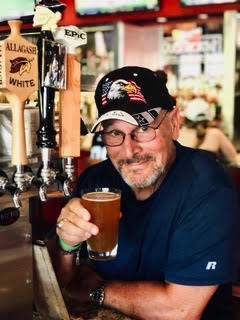 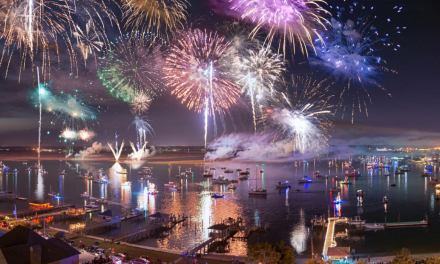 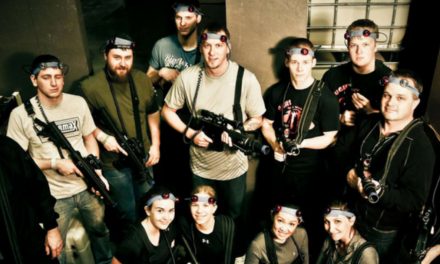 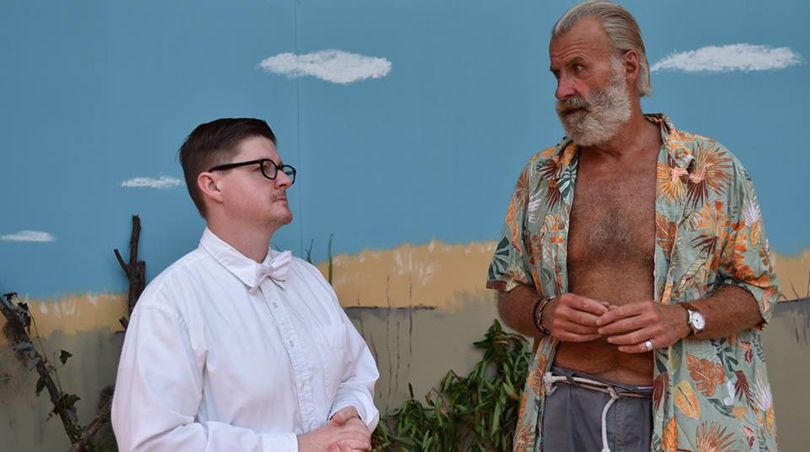