X Marks the Spot – Board & Barrel in Wilmington, NC

by Kurt Epps (The PubScout)Nov 12, 2019Restaurants & Bars, The Blog, Wilmington 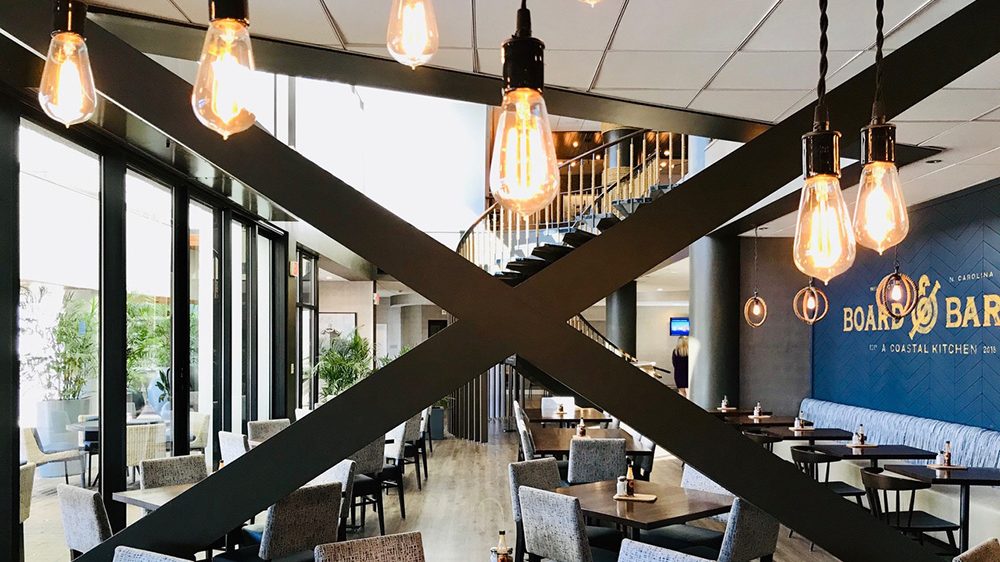 “Not many people ever came down to this hotel dining room,” said Chris, a regular visitor to Wilmington from Ft. Bragg as he sipped his “Presbyterian” and savored his Chicken Gumbo Soup. “Now it’s always busy.”

Board & Barrel, in the belly of Wilmington’s Hotel Ballast, has a ground-floor view of the hotel pool, the famous River Walk and the Cape Fear River; and according to the gracious, affable manager Dacia Zimmer, the summer season always sees crowds of visitors.

But she hastens to add that those crowds are just as present in the “off-season,” except maybe in January and February, when enjoying a “Southern Belle” craft cocktail or a “Presbyterian” at poolside might not be high on the to-do list. 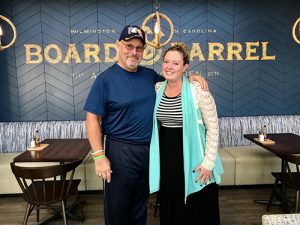 The inside space recently underwent a ten million dollar renovation, which included adding a substantial buffet area. And that renovation also dodged a very big bullet named Florence, but more about that later. Its distinctive X-frame interior design, which separates the dining area from the bar, offers comfortable seating and views, while providing a chic combination of airiness, intimacy and privacy.

And while you’re there, you can enjoy more of Master Mixologist Grace Jefferys’ hand-made craft cocktails (prepped with exacting precision and care by our barman Harrison Tripp) using infusions and even eye-droppers. But there’s also a very healthy craft beer list with three beers on rotating taps (and more in cans and bottles) that will slake the thirst of any true craft beer nut. Food and Beverage manager Coe Wilson handles those aspects of the operation.

But if you just come here for the “Barrel,” you’re doing yourself a disservice, because the “Board” part of the name is impressive indeed, based upon what we sampled.

The missus got Chef Nate Sims’ Special Crab Cakes and, between “mmmmm’s,” “wows” and “Omigods,” allowed that they were among the best -i f not THE best – she’d ever had.

Full disclosure: yours truly is definitely not a Crab Cake guy, but she insisted I try one, or at least small part of one, leaving more for her. All I can say is if every crab cake offered everywhere tasted like this, yours truly would become a Crab Cake guy.

It shouldn’t have been surprising, therefore, that Chris’s wife Mary thoroughly enjoyed her Crab Dip with Pita Chips—and a Presbyterian or two. Chef Nate told me that the current menu was in flux and about to bear his personal imprimatur in the next month or two. Two of his dishes – one was that fabulous crab cake – were actually available today, so I ordered Chef Nate’s Chicken Gumbo Soup.

It was nothing less than incredible, a NOLA- style gumbo so good, so warming, so chock full of chicken, sausage and cockle-warming flavor that I never set my spoon down till it was gone. Without question, it will be a staple appetizer for me when I visit again.

But a very important word of warning: Do NOT order the Carolina House-cut Fries with Pulled Pork, Pimento Cheese and Sweet Barbecue Drizzle from the appetizer menu. If you do, it’s so big, so delicious and so wonderfully presented with fries and pork that are done to perfection, it will, as my grandma used to say, not only “spoil your dinner,” it will become your dinner. 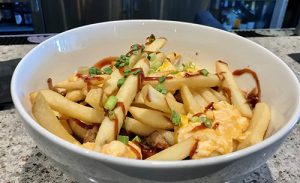 Of course, you could always take a break after the appetizers, take a stroll on the adjacent River Walk and come back an hour or so later to have that entreé. Speaking of the River Walk, that unwelcome guest named Florence, who so devastated Wilmington a year or so ago, seemed to have minimally affected the Hotel Ballast, Board & Barrel and Ruth’s Chris Steakhouse, also lodged on the premises.

Dacia allowed that when the Cape Fear River overflowed its banks during Florence and began to flood the Port City, the topography of the hotel site sent its waters to either side of the building. Due to construction that was ongoing on the street side of the hotel at the time, a massive hole had been excavated. The Cape Fear’s rushing waters filled it instead of the hotel lobby, creating a huge moat, but sparing the lower floors of the Ballast from any damage.

But while the rising Cape Fear River miraculously avoided the Board & Barrel, you should not.

Because this “X” marks a great spot, and one to which I’ll return often.